Bayes’ theorem is a way of determining the likelihood of an event A given that another event B has occurred. It’s a way of making an educated guess without much information to go on.

Bayes’ Theorem gives you an idea of how much you should trust the evidence you have. If your evidence is weak, you won’t end up trusting it. For example, I’m sure my neighbours don’t think that our house is on fire every time they hear my fire alarm going off at supper time. (But it is pretty good evidence that I’m a lousy cook.) They’ve lost their trust in the evidence that my fire alarm gives that our house is on fire.

Say you are looking for P(A|B), the probability of event A occurring given the fact that we have the evidence B. For this to work, you need to know:

Given these data, you can put the numbers into the following equation:

You might ask: “How do we get this equation?” We can start with the axiom of probability: P(A and B) = P(A given B)P(B). This axiom is saying that the probability of two things happening is the same as the probability that one thing happened, given that the other already happened. 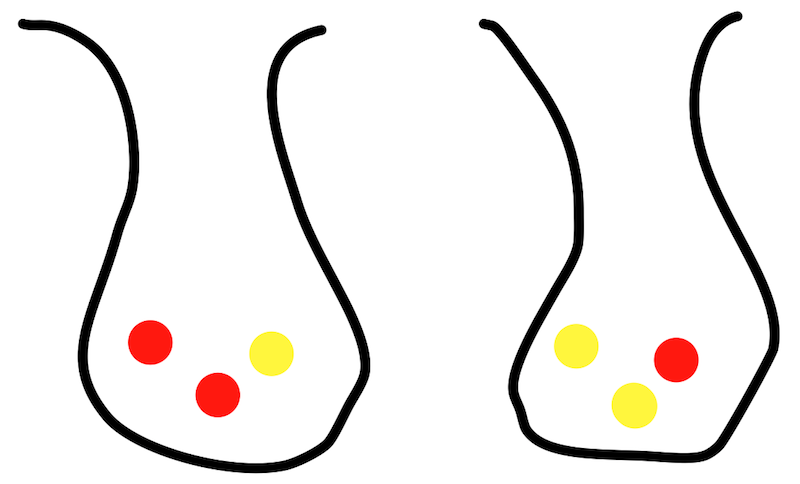 You don’t know which bag is which.

If you pull a yellow ball of a bag, what is the probability that it is bag A? We have an intuitive feeling that it’s most likely Bag B, but Bayes’ can give us an exact answer. This will be given by:

Plugging these values in, we get the following:

The result is 1/3. So we know that if we reach our hand into one of bag A and bag B, and draw a yellow ball, that the probability that we reached into bag A was 1/3. This matches our intuition, but Bayes’ Theorem is most well known for it’s intuition defying examples.

You’re walking down the hall at work. You see someone walk out of the software development wing who is odd. You wonder to yourself: is this person a Fortan developer? Your sneaking suspicion is that this odd person is probably a Fortran developer because you have a feeling like Fortran developers are mostly odd. Let’s work through an example.

Let’s substitute in some estimates for these values.

Let’s plug the numbers into Bayes’ theorem and find out whether the odd person we have observed is probably a Fortran developer:

This is all super interesting and cool, but there’s an even more cooler application of this theory we can look at. Notice how the prior probabilities we worked with in the examples before were static. We can continually update these to get a better model of our simulation as we encounter new data. Assuming that the model behaves consistently, we will get continually better results.

A historical example of this line of reasoning comes from a thought experiment performed by Thomas Bayes. The experimenter asks an assistant to throw a ball onto a table (for the sake of the experiment, it doesn’t bounce or roll). The goal of the experiment is to determine the location of this ball without being able to see its location. The assistant would then throw ball after ball onto the table and tell the experimenter whether each successive ball landed to the left or right, and behind or in front of the first ball. By running successive trials, the experimenter can update their view of where the ball might be. For example, if most subsequent balls are reported as being to the left of the first ball, it’s safe to guess it’s near the right side of the table. Bayes’ Theorem lets us quantify this measurement.

Now we’ve seen how we can apply a learning and Bayes’ to improve our predictions using probability. Let’s apply the same to classifying something a bit more complex. Here we will be tracking multiple probabilities and combining those to predict a classification of a document.

This technique assumes that we have a training set of data where a human has manually gone through and confirmed the classifications of a group of documents.

Example of headlines and news category:

Using this data we can train a classifier… Let’s break down the results by word and see which words tend to be in certain categories:

(Note that this data will work for an example, but for good results you would want a much larger training set than this.)

Here we can see the prior probabilities of a given word in a title affecting the classification of the document. Now let’s assume that we fed millions of headlines into this system and ended up with something like this:

And so on. This gives an example of how sports-centric terms will train to give high probabilities of related documents landing in the sports category. The prior evidence here is strong.

When we want to classify a new document, how do we compute the probability of it being in a given class, now that it has multiple terms? First, let’s think about what it would mean if there were only two terms to worry about.

This is already complex for only two terms, but let’s look at a simpler way to look at this. We can assume independence of the terms. This may not be the most accurate model but it will give us results that we can work with and evaluate. This assumption that the terms are independent makes calculation simple, but it’s also not entirely accurate, hence why this technique is called ‘naive’. This is the ‘bag of words’ technique commonly used in NLP. For example, headlines that contain ‘delicious’ would tend to occur more often with ‘cake’ than ‘manure’, meaning ‘delicious’ and ‘cake’ have a dependence. Naive Bayes’ classifiers can compete very well against other classifiers in terms of accuracy, but we need to be mindful of this limitation that we have imposed on ourselves.

If we assume that instances of ‘win’ and ‘team’ in a sentence are independent, (which they aren’t entirely), we get an easier formula where we already have the answers in our table.

This will be a lot easier to calculate. And we can generalize this formula:

So how would you implement this?

But there is real value in understanding how algorithms work. So let’s take a look at how one would implement a naive Bayesian classifier.

Here we have two methods. classify is pretty self explanatory. It’s just finding the maximum scored class for the given document. get_score is more interesting. Here is where we apply naive Bayes to calculate the scores for each class. Notice two things:

An important part is missing here, we didn’t compute the tables of prior probabilities. As mentioned before, we can do that by working through a collection of pre-classified training documents and building up counts of which features lead to which classes. Let’s look at how that might look:

Here is a working example in old-fashioned javascript that does the same thing:

And that is it. We’ve successfully used Bayes’ Theorem to classify documents.